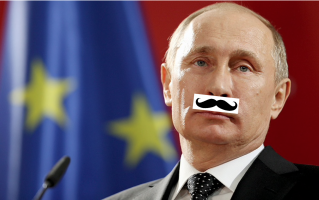 In the wake of many controversial and heated Cabinet picks by the President-Elect, one candidate in particular has Americans saying “meh, could be worse.” Mr. Trump has decided to appoint “Pladimir Vutin” to head the newly formed Department of Cyber Espionage, a man who has been taking the political world by storm.

“I am very excited to get right to work securing American secrets for the people of this great nation. And maybe others—who knows?” said Mr. Vutin, bending down to pick up the brown felt mustache that had fallen from his upper lip.  While congressional Democrats have cited Mr. Vutin’s connections to Russian politics as both risky and say that he “isn’t even trying anymore,” President-Elect Trump stands by his candidate. “Plad is the greatest. He’s the best with computers. I mean, just the other day, he helped me change the nuclear launch code log-in to ‘password123’ and update Twitter. The guy’s almost as smart as I am.”

When American citizens were asked on the street to comment, most simply feigned an expression of shock, and continued to shop for bomb shelter materials with mild disinterest. One New York resident, Janet Williams, reflected, “Yeah, we know it’s him. It’s the fakest mustache. But frankly, in a world of fake news, the honesty is refreshing.” Most people seem to wish Mr. Trump would stop denying the whole situation and be happy that we at least have one strong leader now.