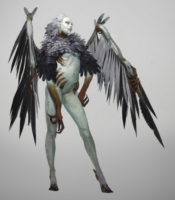 Over the past several nights, Northwestern students living near South campus have reported hearing haunted, devilish shrieks as wild harpies descended on unknowing sorority rushees and carted them back to an unknown lair. Allegedly they have been seen skulking across campus, shrouded in Canada Goose jackets, before swarming in a feverish frenzy around hapless freshman girls. “[She] was just gone,” reported shell-shocked sorority hopeful Alina Kilburn, WCAS ’20. “One minute we were talking about which sorority we had as our first choice and then they took her—they just took her. All I remember is screams and chanting and then gone.”

Oddly enough, according to bystander descriptions it appears that the girls are not being rushed back to the harpies’ lair against their will. “I AM ASMODEUS, RUSH CHAIR,” Said the harpies’ spokesperson. “THE UNANOINTED SHALL BE BROUGHT FORTH UNTO US FOR JUDGEMENT. THEIR TORMENT IN LIMBO WILL SEE THEM REWARDED SO SAYETH ASMODEUS, RUSH CHAIR.” Asmodeus, rush chair, would not reveal her last name.

In addition to being swarmed in person, the harpies’ victims also face a tirade of bewildering and ominous threats on their Facebook pages. “I thought I was getting along with the sisters of Rho Alpha Upsilon really well until yesterday.” Reports Maureen Lin, SESP ’20. “But then they started leaving these creepy messages like ‘YOU’LL NEVER WANT TO LEAVE. YOU’RE HOME NOW.’ Or, ‘JOIN OUR RANKS AND THRIVE.’ The most upsetting one so far was just ‘MAUUREEEEEEEEN!!!’ Like, you don’t notice the wings, feathers, and small bits of meat hanging from their beaks until they really get their claws into you.” Especially unnerving, reports say, their claws seem to be incapable of turning caps lock off and so are constantly shouting.

Girls that have been exposed to the harpies and their cult-like brainwashing methods have been advised by the university to stay inside for their own safety. Todd Adams, Assistant Vice President and Dean of Students released the following email: “We realize that college is an exciting time for all students but we encourage everyone, especially freshmen, to prioritize schoolwork and preparing for your futures. We cannot in good conscious recommend students join a cult of bird women whose sole purpose is to feed off the misery of others. However, we’re not going to stop them so take that as you will.”

At time of press it has been estimated that roughly 40% of the women on campus have either been abducted by or become harpies. University police have been unable to locate their lair despite the ceaseless howling coming from the sorority quad.