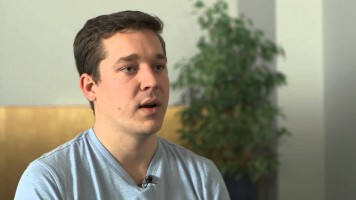 For many people, Valentine’s Day is a holiday filled with chocolates, roses and Hallmark cards bought the day before at CVS. But for senior Mark Holbrook, WCAS ‘17, Feb. 14 is time to give back to the other gender in a different way. The economics major, who says he minors in “getting lit,” realized recently that referring to women as “females” was offensive. He was made aware of this after his girlfriend, senior Jordan Mendelson, MEAS ’17, asked him how he would feel if women started sentences with, “Males be like” or “I hate when males do this.”

“I felt reduced to my biological component and it was uncomfortable,” Holbrook said. “It all made sense after I thought about it from a man’s perspective, and that’s what feminism should be about.”

And slowly after that, Holbrook said he learned about other “girl stuff” such as how it’s bad to joke about women being in the kitchen or how they can’t drive. Above all, he said he finally understands how unfair it is for guys to expect sex from women, especially on Valentine’s Day. Women should be able to not have sex if they don’t want to, Holbrook said, provided that they’ll still do “stuff under the table at Chili’s.”

Although he claimed 2017 has been a year of realizations for him so far, his girlfriend said he still has a lot of growing to do. For example, Holbrook doesn’t believe in the wage gap or think women should have reproductive rights.

“I’m hoping to wheel out a five-year plan for Mark,” said Mendelson. “Next Valentine’s Day, for example, I’ll teach him about why saying ‘feminazi’ is not okay. And the year after that, he’ll finally mature at a level where his brain can understand the word ‘intersectional.’ But for now, I’ll take what I can get.”