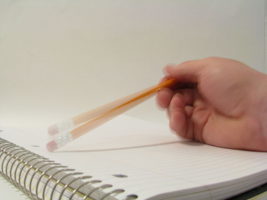 Shocked teachers and peers watched in astonishment as NU police escorted fifty-seven students in for questioning today for cheating via Morse code. The large group of bright students were notorious desk-tappers during tests, which led to many suspicions of an inner ring of Morse code experts. “They’ll be going away for a LONG time. It’s a real shame, but these scumbags have it coming. That tapping is goddamn infuriating” said NU Police chief Chuck Baldswell.

The proctor who caught on, sociology professor Jim Farnagin, when reached for comment, said: “Honestly, for the first couple months, I hadn’t suspected a thing. They tapped their pencils on the desks, pissing everyone off in a ten-foot radius, sure, but it was completely harmless. Or so I thought.”

Professor Farnagin became suspicious only in the last couple weeks, during midterm exams. “During the multiple choice, it was annoying. But after the time came for the short answer section, the tapping went from ‘Amateur Drum Solo’ to ‘Pissed-Off Flock of Woodpeckers.’ I knew something was up, and had to report it. I called NU Police to get here immediately.”

Police were summoned to the scene, where they quickly questioned several accused students. They confessed, saying the pencil-tapping was a front for communicating answers. When asked how deep this conspiracy went, the students were quick to give up fifty-three other allies, spanning several classes.

After the perpetrators were properly escorted into cop cars and driven away, a great silence fell over the lecture hall, followed by a tremendous cheer. “Frankly, I don’t care what they did, or how long they’re put away. We’re tired of their ways. And also I was stuck on Question 3, and the sound was driving me batty. They can rot in prison for all I care,” said one student part of the jubilant riot.