Ethics Probe: Ivanka Must Be Paid for Feeding Her Father Blood of the Uninsured 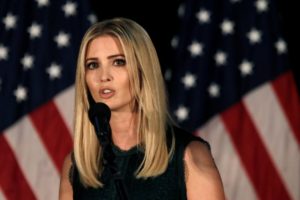 Last week, Ivanka Trump’s unpaid advisory position in her father’s administration attracted enough backlash that she inspired an inquiry from the House Committee on Ethics. Their probe, released last Friday but buried under the standard level of administration chaos, condemns the fact that Ms. Trump will not be paid for her services, which the majority report says raises significant conflict of interest concerns. It recommends that the multimillionaire be forced to receive a government salary for work that includes advising the president on high school level civics and regularly feeding him the blood of the uninsured.

The Ethics Committee was compelled to investigate conflicts of interest between the President and his daughter—who has made no plans to cede control of her father’s ethically dubious financial holdings—following widespread condemnation from constituents who insisted their congresspeople “do their jobs.” Once aware that Ivanka’s position was almost textbook nepotism and that she was literally feeding her father the blood of those less fortunate, the House committee was forced to publicly condemn their fellow Republicans.

“Let’s address the elephant in the room,” said Ethics committee chairwoman Susan Brooks in a telephone interview over the weekend. “Without a salary, how are we to be confident that Ms. Trump can’t be bought? It is imperative that, if she is to have the ear of the president and his elaborate blood transfusion apparatus, she needs to be financially independent and therefore unable to be bribed by entities acting against the interests of the American people.”

Ms. Trump, whose net worth is estimated to be in the hundreds of millions, had originally wanted her position to be completely voluntary and therefore less financially burdensome to the administration. But, considering the GOP’s blind eye towards golf trips and Trump Tower security, Brooks insisted, “A government salary, pension, and benefits are really the least we can do to ensure our officials are held to the highest ethical standards we can expect from them.”