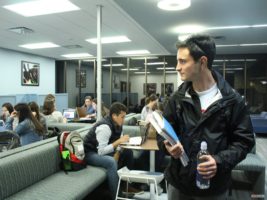 Upon returning from their first weekend of spring quarter, students were mildly surprised to find that God had decided to sic countless amounts of prospies on local safe haven Norris.

Sources indicate that students ready to get back into the groove of hitting up Norbucks for a mid-morning coffee were dismayed to find their path blocked by throngs of wide-eyed teens and their judgmental parents. Those who thought to attempt Dunkin as an alternative found that the ground floor was even worse, with numerous tour groups completely blocking any direct access to caffeine.

“I know this happens every year,” said Alan James, WCAS ’18, “but I think God really wants us to suffer this year. First he took away our March Madness win, and now I have to put up with this crap. I just want my damn coffee.”

But that isn’t the only thing God has stolen from sleep deprived students. “I went to Norris to buy books,” said Lissa Nelson, SESP ’19, “and I couldn’t get past the prospies trying to decide between a gray or a purple hoodie. It’s like God wants us to live in a nightmare, filled with self-important high school seniors. Just get the purple one and move!”

Recent reports have suggested that this flood of prospies is even reducing attendance and productivity among students. The prospies seem to act as if they were a swarm of locusts, reducing access to campus’s vital sustenance such as Starbucks iced coffee and Subway sandwiches.

Many are wondering what Northwestern has done to bring down the wrath of God on Norris. The Allison dining hall rabbi theorized that things were just going too well in winter quarter, and He had to find a balance.

Norris dwellers just hope God will soon be satisfied with their increasingly mediocre lives and prospies will have made their decision by the time midterms start.