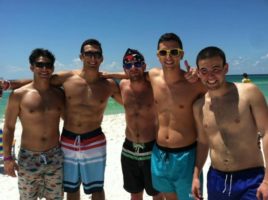 In a decision that has made many students mildly uncomfortable, fraternities across campus have reportedly changed the title of “Bigs” to “Daddies.” “It’s standard procedure during the rush process to pair a current member, or “Big,” with a pledge to make him feel more welcome. But we didn’t think the title fully captured the relationship we wanted them to form,” said Ryan DeMarco, president of Northwestern’s Interfraternity Council, with a wink.

Both Greek and non-Greek students have disclosed to Flipside feeling squeamish about the rebranding effort, calling it “confusing, both sexually and otherwise,” but DeMarco calls it a step in the right direction.

“Many people have certain ideas about fraternities and masculinity, but frankly it’s time to put those toxic ideas in the past,” DeMarco said to assembled reporters while proudly wearing a fishnet t-shirt with everything on display. “If a bro wants to bro out shirtless with his Daddy, that should be his choice, and we should all support his decision.”

Along with the name change came announcements for new fraternity events and clothing, such as the “All-Oiled, All the Time” Interfraternity Wrestling Match and “BYOB (Bring Your Own Banana) Ice Cream Funday” event. “Instead of the lame old t-shirts with our logo, we’re offering skin-tight leather pants with the letters on the butt for all the Littles and their Daddies,” said DeMarco with pride. Pausing to slap a fellow bro on the ass in greeting, he added, “It’s an exciting time to be a Daddy in Greek Life.”