Op Ed: I Bought a Rice Cooker on “Free and For Sale” 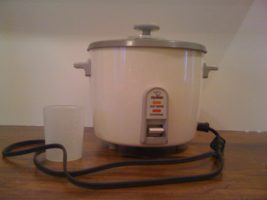 In dire need of a rice cooker for my apartment next year, I have turned to the underground.

A little known group called “Free and For Sale” exists for those who aren’t afraid to get their hands dirty in order to sell/acquire apartment necessities. A quick search for the group won’t yield any results though. NAY. You have to have someone vouch for you, and then someone vouch for the voucher. Twice. With a small ceremony. And a fire. Luckily my distant friend from fourth grade had the inside connection.

After what seems like hours I have finally found what I crave: a Red Rockin’ Rice Cooker. It says $25, but after I wipe off my computer screen, I see it’s priced at $15—much more reasonable. I message the seller: “Hey ‘Mary’ I see you’re selling your rice cooker. I’m super interested.” What kind of name is “Mary” anyway?

Three minutes later, and I must’ve said the wrong thing because there was no response. I must’ve done something wrong. Something terribly wrong.

But, “Mary” eventually responded. I almost threw my computer out the window for the second time. She replied briefly, “Yeah. Meet me at Tech tomorrow at 10.” I knew I’d find her in the earth sciences hallway with the broken lighting.

At Tech at 7 AM with one ten-dollar bill and a crumpled five in my pocket. Getting here early just in case. You never KNOW..!..?

She just arrived with this glorious machine. I will never be happier in my life. One single bag of rice, an amount of water, and the push of a button and I have a steaming pile of white (or brown) goodness on my plate, ready to shovel into my gaping hole on my face (mouth). OH myyy, George Takei.

Back in the apartment, and my precious sits beautifully on its own counter. But it won’t light. No light. No LIGHTS! It’s broken.

This is some bull…