“I Can’t Turn It Off!” Screams Morty, Hurtling Past Onlookers in a Golf Cart 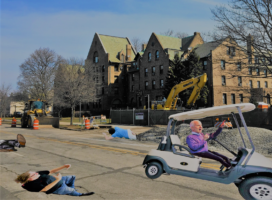 Terrorized students and pedestrians narrowly avoided a careening golf cart outside of Tech, scrambling and diving onto the grass as onlookers looked on. “Oh god, someone please stop this thing! I can’t turn it off!” President Morton Schapiro reportedly yelled, swerving from end of sidewalk to end of sidewalk with a desperate, panicked look plastered across his face.

Once he reached Noyes and Sheridan, Morty hysterically scrambled with the steering wheel in an effort to avoid a group of three students who had unintentionally spread out across the length of the sidewalk, according to eyewitness reports.

“It was like, slow motion,” reported one of the students, Chris Fletcher, WCAS ’19. “Morty totally bounced that thing up on its two side wheels, like a complete 90-degree rotation. And we just saw this shadow pass over us. I made eye contact with him. I wanted to help, to reach out and pull him to safety. But then he was gone.”

Those close to Morty report that in the days leading up to the incident, he had shown an unusual interest in wet-nitrous-boosting systems, even going so far as to request a DTC group for an undisclosed project. “Those kids should’ve known better,” said Morty’s secretary, “once he gets an idea in his head you better make sure you hide the high-energy combustibles or he’ll get in there, believe you me. I blame those video games he plays, they’re such a bad influence on impressionable troublemakers like him.”

At time of press, Morty was seen skulking out of tech with an aluminum canister tucked beneath his jacket. An exasperated janitor claims he overheard, “this time it’ll be hella fast, hella cool.”