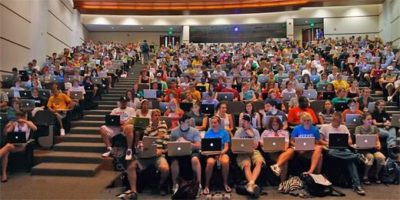 Even 100+ student courses aren’t safe from the overenthusiastic class participator, as Thursday’s Intro to Energy Systems of the 21st Century lecture was yet again ruined by an unnamed theatre major. This is reportedly the seventh time lecture has been derailed by this repeat offender with no sign of remorse.

“Things were looking good,” said fellow classmate Angela Dirkin, WCAS ’19. “We were on track, following the schedule on the syllabus and everything. Then fuckin’ Mr. ‘I’m the next Ryan Reynolds’ had to chime in and tell us all how hydro powered textile mills relate to his time spent in North Carolina last summer as a camp counselor. Fifteen minutes later, class was over with no time left to discuss the midterm next week.”

Some witnesses claim he means no harm; others speculate he has more nefarious motives at play. “What does he care about energy systems of the 21st century?” said TA Arthur Campbell, who has the future Oscar winner in his discussion section. “Clearly this is all fodder for his autobiography, which I bet he already has partially written in the notes section of his iPhone.”

The rest of the class is eagerly awaiting his People Magazine interview, which projections indicate will be released in 2021 or, more likely, never. Classmate Leigha Scott, SESP ’18, is particularly looking forward to this moment.

“Yeah I would love to read it. I told him to shut the fuck up last Thursday. Maybe I’ll be in it.”