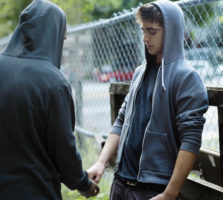 Late Friday night, with just hours to go before the start of Dillo Day 2017, NUPD allegedly stopped the Northwestern Indie Rock Club from distributing large amounts of MGMT to the student body.

Sources report that earlier in the day, Police Chief Brian Christopher received an anonymous tip that members of the student group were acting suspicious by “loitering in the alleyways of Evanston wearing aviators and heavy leather trench coats.” After a quick Google search of suspicious outfits, Christopher had a hunch that the trench coat sporting students were partaking in illegal activities.

Knowing no undergraduate would snitch on another the day before Dillo, the police chief reportedly decided to go undercover to catch these elusive criminals. After further 21-Jump-Street-style investigation, Christopher witnessed Indie Rock Club leader Bartholomew Jones, WCAS ’17, illegally copying MGMT music from an old Windows desktop in the bowels of Tech. Experts say Jones was supplying the MGMT to students via iPod Nanos. Although Jones had no comment for reporters, Christopher claims that Jones confessed he was distributing the songs through iPods because “just like the MGMT songs, the Nanos are so outdated that no one would have suspected it. Or so I thought.”

Jones was taken into custody and promptly given a slap on the wrist, a notoriously extensive punishment for illegally copying music. The police chief, on the other hand, called it the biggest crime bust in Northwestern history since that one chemistry professor was found making acid in Silverman hall.