Seismologists Detect Signs that Dormant Student Might Wake Up Soon 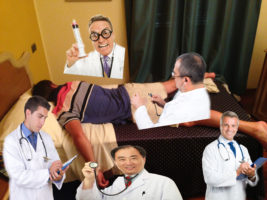 After several hours of careful observation and data collection, seismologists in Northwestern’s earth science department have detected signs that dormant student Chris Holland, WCAS ’19, is likely to wake up in the near future.

“Our team’s seismographs picked up increased tremors originating from the deepest blanket layer of Holland’s bed. Combined with Holland’s sleep patterns from previous Tuesday mornings, we have sufficient reason to believe the long-dormant student will emerge from slumber imminently,” lead scientist Veronica Tyson said at a press conference today. “Also, his alarm has been going off for the past 20 minutes.”

The volatility of previous Holland wake-ups has sometimes caused widespread academic damage. “One morning last winter quarter, he was sleeping like normal, the usual tossing and turning. Then without warning, he violently burst out of bed and ran out of the room. Turns out he had a midterm that he forgot about, and he ended up having to drop the class it was for,” former roommate Tommy Rizzuto said.

At press time, the seismologists were forced to recalculate their projections as Holland pressed the snooze button again.