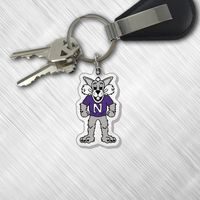 Daniel McBride, WCAS ’21, posted in the Northwestern 2020 Facebook group at 1:24 am on Friday: “Hey guys, I lost my keys somewhere between Allison and Bobb. They’re on a NU purple lanyard. Let me know if you see them please!!!” He even promised compensation, finishing with, “I’ll make you cookies!”

Upon talking with McBride, he revealed the reasoning behind his online call to action: “The more exclamation marks the better. You have to let your peers know the urgency of losing a $196 key,” even at an institution where students pay almost 400 times that amount yearly. “As for the cookies,” McBride continues, “that was a lie. I live in Bobb. I don’t even have laundry detergent, let alone baking flour.”

As of Tuesday, there has been a single response to McBride’s post. Grace Lin’s “lol”.

On asking McBride how he thinks this could have happened, he responds, “I don’t know how I lost it. It must have been while I was walking home from La Mach. I usually never lose things.”