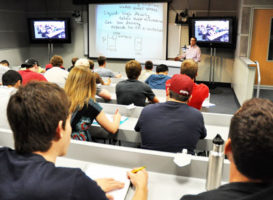 Explaining the curriculum, Professor Dover had this to say: “The class begins with the abstract: what a relationship is and why someone would want one. Later on we get into the nitty gritty details, like how to hold hands and the science of maintaining eye contact.”

McCormick student Stella Virgin noted general enthusiasm from the McCormick student body for Dating 101. “A lot of my friends need this class. Me? I’m just taking it for the distro. I have a boyfriend at Loyola. It’s not like you’d know him though.”

Despite student praise, the course has its critics. “We anticipated controversy,” said department chair Neil Down. “There will always be the naysayers, claiming ‘It’s impossible’ and ‘Why even bother? These are engineers, after all.’” Such criticism left Down undeterred. “If Rob Kardashian can land Blac Chyna, who’s to say whole-brain engineers can’t figure this sh*t out?”