Frat Guy Declares It “Year of the Doggy Style” 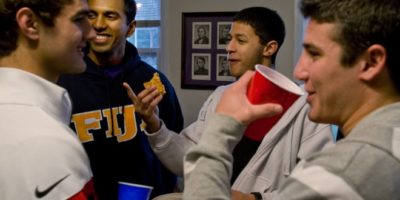 To help ring in the Chinese New Year, local Beta Beta Beta member Jeff Simmons has personally declared it “Year of the Doggy Style.” Claiming he has already ordered a 100-count pack of egg-roll-flavored condoms, Simmons assured that he will be “more prepared than ever” this time around.

“Last year was Year of the Rooster, and you know my rooster was busy,” Simmons stated. “And Year of the Horse? Tell the ladies you’re hung like one. Boy, is that a conversation starter.” He later delved into at least 15 more animal pickup-lines, that have been “scientifically proven” to “get ‘em every time.”

Simmons also described a celebratory party for the event being planned by his fraternity. Remarking on the importance and grandeur of this longstanding BBB tradition, Simmons said, “We have only the finest and most authentic Chinese beer at this thing. If that doesn’t play out, pouring some soy sauce in Busch Light normally does the trick.”

When asked about the attendance of the Year of the Doggy Style party, known colloquially as YODSP (YAHDS•pee), Simmons replied, “At least 100 hot girls, wearing nothing but lo mein noodles. The brothers, we get decked out in pimpin’ silk kimonos. And by the end of the night, well, I’m sure you can fill in the blanks.”