Ketchup on Toast Making a Comeback Among Recently Divorced Fathers 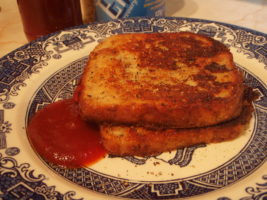 A series of polls from various respected news outlets and concerned children have reported that ketchup on toast has been making a resurgence among recently divorced fathers. The news has propelled a collaboration between Pepperidge Farms and Heinz, to create a new product known as “H&P’s Sad Sack Snack Packs”: “We’re dedicated to bringing our most devoted customers exactly what they need. And when that customer refuses to leave the hotel room they’re renting for ‘just a little while until she calms down’ and wants the taste of something that has the semblance of food, well, we’ve got them covered.”

Experts say that this newfound popularity with recently divorced fathers has been the result of an increase in microwave ramen and Easy-Mac prices across the country.

Half empty jars of peanut butter that have been open and on the counter for a couple weeks now have also been a hit amongst the unshaven, bleary-eyed demographic, confirmed spiteful ex-spouses and kids who blame him for the fallout.

This round of market research is expected to predict an uptick in consumer confidence in dirty futons placed in the garage, as well as an increase in men in their mid-40s finally having the time to work on that bestselling novel that she always said he couldn’t write, but will finally show her, damnit.