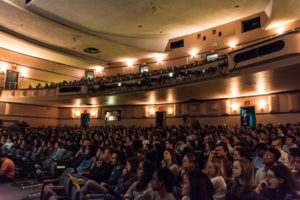 Thursday night, Cahn Auditorium was sold out for the “Treble’d Times Mixed A Cappella Concert,” giving confidence to the musical groups, until they realized that the entire audience was just other a cappella groups waiting to perform next.

“How could this happen?” asked leader of the group Alto-Native Lifestyles and vexed organizer Kate Plumont.  “I mean, we did give free tickets to all performers, but, really? Do none of us have any real fans?”

As each group performed and walked off stage to politely watch the next group, the auditorium slowly emptied, as it became more and more apparent that everyone there was only there to sing, between quietly clapping at each other’s numerous renditions of “Shake It Off.”

The mistaken crowd size is largely blamed on the fact that the number of a cappella groups has been allowed to expand without any regulation and oversight. Each one, by law, is required to have some sort of musical pun in their name, leading to such headache-inducing headliners like “Chicken Tenors with a Side of Fries,” “The Bassment Dwellers,” and “The Boys with Beats,” which doubles as an agriculture club.

After the event, the a cappella watchdog group “Stop Blowing Up Our Facebook Pages with Invites” called for regulations.

“They are growing in number and size, like some cheery, Glee-watching cancer. At this rate, every student on campus will be a member of an a cappella group by 2023. And frankly, there are only so many ways you can hear a butchered rendition of a Pentatonix arrangement before you realize that we need sweeping change.”