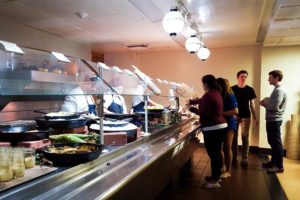 After a careful analysis of their data, a team of Plex scientists has confirmed that Camila Cabello’s annoying song “Havana” is probably playing in one of the building’s two dining halls. The news, while unfortunate, did not come as a surprise to many disgruntled students.

“It’s just not a relatable song,” said Weinberg freshman Diana Temkins. “I mean, who even goes to Havana? Flying to Cuba is very expensive, and you even have to apply for a whole tourist visa and everything.”

Other students, like McCormick senior Torrey Welk, had even stronger reactions. “Every time I hear her go ‘Havana ooh nana,’ a little part of me dies inside, and I feel my soul slowly wither away,” Welk said, adding, “Sort of unrelated, but for the past few weeks I’ve been noticing a team of scientists in white lab coats going into Plex West and scribbling down a bunch of information—does anyone know who those people are? Are they, like, students or something?”

Evidence suggests that the song is not merely annoying to diners, but also has a very negative impact on Northwestern’s reputation. “If they just stopped playing this obnoxious song in the dining hall, we would definitely move Northwestern Dining’s ranking from number five to number one,” said Daily Meal editor-in-chief Roger Perez. “Although, I also had to lower the ranking this year because somebody cut me in line on stir fry night.”

Sources report that university officials are very anxious to solve the situation, as the growing number of frustrated students cutting off their ears has been causing sanitation issues.