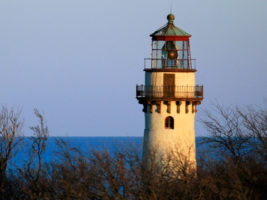 After a pitch-black night of stormy waters and blustering winds, it was the Grosse Point lighthouse that safely led Morty’s new “S.S. Tuition Raise” back to shore when all hope seemed lost.

The maiden voyage of the jewel-encrusted sea vessel had been scheduled for yesterday despite inclement weather warnings. Everything had been going well, according to spectators, until a lightning storm came in, and fast.

“The waters began to boil, the skies turned to ash, and the threads on the back of my whale-bone-thread and elephant tusk sailor’s outfit stood on end. I was terrified!” said self-professed “Cap’n Silverscruff”, President Morton Schapiro.

Many onlookers were reasonably worried for the sea-faring president, seeing as the mast of vessel was comprised entirely of pure platinum, with a little bit of gold filigree along the edges, for decoration.

But when all looked bleak, the Grosse Point lighthouse came to the rescue, and shined a beacon on the S.S. Tuition Raise that made it light up “like a goddamn ruby-covered disco ball”, and led it slowly and surely back to the shore.

Morton Schapiro has thanked the workers at the lighthouse repeatedly for their service, and added “I’d hate for this year’s 3% tuition hike to disappear under the waves just like that.”

In unrelated news, Morty has announced another “unfortunate and unavoidable” 3.6% tuition raise in the next year, so that “First Mate Todd Adams can finally race me to decide who once and for all commands these waters.”