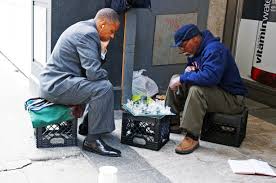 “You see, if you draw this line here, and this line here, and then you move the point of intersection…” Rossi said, explaining why the man’s situation was a predictable result of the supply and demand graphs for labor. “It just doesn’t work. If you raise the minimum wage or print more food stamps, this line moves, and that could negatively affect the stock market.”

Ron Gurley, the recipient of this lecture chose to sit and listen rather than risk losing his hard-earned spot in front of the pharmacy.

“If I walked off, maybe someone else steals my prime spot outside CVS,” Gurley said. “If I punched this son of a bitch, I don’t have money for bail. I just had to sit there and listen while he told me about the beauty of the free market. I thought it would never end.”

Later, Rossi posted a black and white photo of him shaking hands with Gurley to various social media platforms. His Instagram caption read “So blessed to be able to help the people struggling on the Chicago streets. Don’t worry, Don, I’m here for you!”