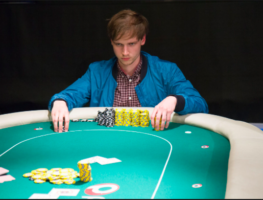 According to reports from concerned family and friends, Northwestern statistics major Nathan Dykstra insists that his gambling addiction is not statistically significant.

“He just kept saying ‘the p-value is above 5%, we just don’t have enough evidence to reject the null,’” said Dykstra’s roommate, Ethan Wenger. “I don’t know what a p-value is, but whatever it is, it’s chickenshit. Last night he bet two paychecks on LeBron averaging under ten points in the next five games.”

Although he has already accrued massive losses, Dykstra has assured others that according to his algorithms, there’s nothing to worry about. “Last week he told me ‘RStudio never lies, I’m fine,’” said fellow stats major Julia Wang. “He wouldn’t share his code with me because he was too busy playing online poker, but he just said he conditioned on the probability of global nuclear meltdown killing us all before his creditors get him. How is he estimating that?”

Despite his friends’ assertions that he is nearing rock bottom, Dykstra appears unbothered by the growing alienation connected with his gambling problem.

In a blog post, Dykstra ran a regression analysis on why his girlfriend dumped him and concluded that his massive credit card debt was ‘not significantly predictive of poor romantic outcomes.’”