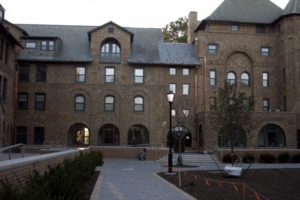 “It’s an eye for an eye,” said NUPD Sergeant Gordan Williams. “With the fall of Chubbies these two groups rose to fill the void and it’s been non-stop chaos ever since. Vineyard Vines is gaining ground but doesn’t have the year-round appeal of Patagonia. We’re not just talking fleeces here – they’re pushing shorts, socks, all kinds of fucked up shit.”

This was the most vicious confrontation all quarter, with over $250,000 of clothes purchased on parents’ credit cards left to burn on sidewalks and porches. Yet, juxtaposed with the warzone environment, frat boys can still be seen playing spike ball and laughing in groups amongst the green paths winding through the houses. “I try and not to let it bother me and just live my life,” claims Josh Whitman, WCAS ’20. “It’s not hard to distance yourself from that kind of lifestyle. I just have my parents ship me J. Crew instead.”

The frat quad still suffers from high crime rates, suggesting that the violence between the two groups will extend long into the future. “As long as their parents are high-paid consultants and businesspeople it’s unlikely anything will change” concluded a grim-looking Officer Williams. “We can confiscate all the puff jackets and polos on campus, but they have far more resources than we do. For every pink whale down, two take its place.”

Per University policy, a travel advisory is in effect for large portions of the frat quad. Students are warned that accepting any free merchandise may result in violence. Last week, Trent Chadwick, WCAS ’21, was found stripped and bound outside of SPAC with a crude mountain range spray painted on his chest.

An anonymous tip line has been established by the University, running 24/7, for any student who witnesses a frat boy wearing Vineyard Vines or Patagonia clothing. Currently, leaders of both cartels are engaged in private talks with Northwestern and Evanston officials. Those closest to high-ranking members say territory disputes may be settled soon, with Vineyard Vines ceding the frat quad to Patagonia in return for becoming the sole supplier of ETHS and surrounding areas.