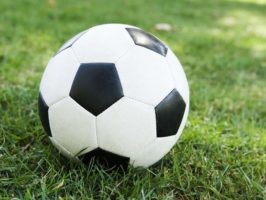 The World Cup has been put on hold, announced a FIFA spokesperson, after an errant kick by midfielder Bernardo Silva during the Spain-Portugal match sent the soccer ball into the yard of mean, crotchety neighbor Old Man Jenkins. Officials had no choice but to suspend play after both teams refused to hop the picket fence separating the stadium from Old Man Jenkins’ unkempt garden to retrieve the ball.

“No way I’m going over there,” Silva told reporters. “Old Man Jenkins is scary. He kills boys that sneak into his yard and cooks them into a stew.” Several players echoed this statement, including Portuguese striker Cristiano Ronaldo, who added that Jenkins also has a really big, mean dog that likes to bite everybody. Spanish defender Sergio Ramos confirmed this, noting that while he has not seen the dog himself, he heard it barking when he was next to Jenkins’ yard a few weeks ago and the dog sounded really mean.

According to unconfirmed allegations, the cause of the players’ fear is allegedly the stories told by Spanish midfielder Andres Iniesta’s older brother, Miguel. Sources report that the players look up to Miguel because he smokes cigarettes behind the abandoned warehouse, owns magazines with pictures of naked breasts, and can do wheelies and other tricks on his bike. “They think he’s the coolest,” said Portugal’s manager, Fernando Santos. “They’ll believe anything he says.”

Play is expected to resume later today, when Ronaldo’s mom gets home from work and can ask Old Man Jenkins for the ball herself.