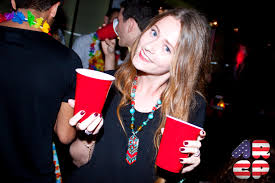 Sophomore Reilly Bergman was found passed out in her dorm this Sunday after a whirlwind of drinking for Halloweekend every night for two weeks straight.

According to sources, Bregman decided to drink every night just in case it happened to be the correct one to celebrate Halloween.

“I didn’t know if Halloween was the weekend before, the actual night of, or the weekend after,” she explained. “But I didn’t want to miss out, so I figured better be safe than sorry.”

Although she maintains the belief that being under the influence caused little interference with her everyday responsibilities, those with whom Bergman interacted disagreed. “Reilly would walk into every lecture screaming ‘it’s hallo bitches’ and then proceed to get up and dance on a chair, usually while spouting something unintelligible about loving elevated surfaces,” described Professor Joe Whitman, instructor of Bergman’s 8 am orgo class. “It was very distracting to myself and the other students, that is, until she left the room to throw up in the hallway.”

After the experience, Bergman stated that she has sworn off alcohol until she can once again drink responsibly. Immediately after, witnesses saw her pregaming last night before passing out in a frat basement.