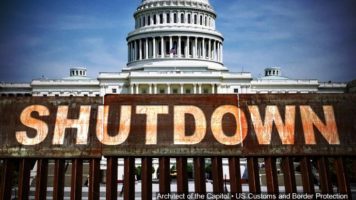 As the Government Shutdown enters its fourth week, many are hoping that an end to the debacle is just around the corner. Government employees are in need of paychecks, welfare recipients are in dire straits, and a bunch of people really need to cum. As is tradition in November, many men are restraining themselves from ejaculating until the shutdown ends. “It’s excruciating,” says No-Nut Government Shutdown participant Byron Lee. “I thought it would just be a two week affair, but we’re on the verge of a full month now. If this goes longer than 30 days, I don’t know how I’m gonna hold up.”

Many health experts are concerned for the well-being of the male participants. “Every young man should bust a nice healthy nut from time to time, but holding it in has unknown effects” says Dr. Marcus Nicholson, an expert on semen-related issues. “Frankly, November is probably far too long a period to withhold busting, but two month-long periods in less than three months? If this keeps up, border security won’t be the only thing that’s going to be declared a national emergency.”

While all No-Nut competitions are difficult for participants, many are claiming this one as the most difficult to date. “I was there for 1995 and 2013, and believe me when I say, this is by far the worst it’s ever been” says No-Nut veteran Andrew Rossfeld, who received the Medal of Honor for his service in No-Nut November 2014. He argues that the figureheads of the current shutdown are making things harder for No-Nutters. “Back then all you had to do was think about Newt Gingrich or Ted Cruz to prevent yourself from blowing a fat load, but now there are absolute daddies like Chuck Schumer and Lindsey Graham leading the charge. How can one NOT nut to them?”

Due to increasing difficulty, many are clamoring for “One Free Nut” coupons to be printed. However, as these are government-issued, there seems to be little hope in sight for No-Nutters.