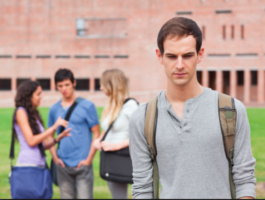 After weeks of everyone from friends and family members calling him Seth despite frantic corrections, Northwestern Sophomore Mark Davidson has reportedly decided “Fuck it, I guess my name is Seth now.” Other students recall seeing a despondent Mr. Davidson walking through Norris, muttering, “My name is Mark my name is Mark” over and over again; and yesterday, he broke into the offices of The Daily Northwestern and launched into an impassioned speech: “I don’t know why people keep calling me Seth! It can’t be a nickname for Mark, because there’s no possible way that you could ever get Seth from Mark. And it can’t be some sort of homage to former Northwestern student Seth Meyers, because I’m not funny or successful. I just want people to call me Mark…” Although he begged The Daily to write a front-page article about him in order to raise awareness for his plight, the editors were too hard at work writing op-eds on the pros and cons on ice cream. Finally, demoralized and tired, Mark just decided to give in to the calls of the people, and is officially known as Seth now.

Meanwhile, a student named Seth has been called Mark for the past three weeks, but has not complained, as he is just happy that people want to talk to him.