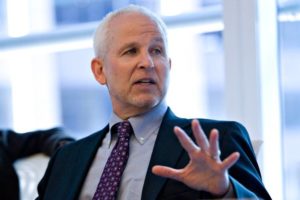 After months of the budget crisis plaguing the university, Northwestern President Morton Shapiro issued a desperate message to investors not to worry because “In Shapiro-Bucks, we’re fine!”.

The school’s bold economic plan, to be implemented this spring, involves paying for all expenses with a brand new currency, “Shapiro-Bucks”.

“It’s crazy, I can’t believe we forgot about this whole store of wealth we had saved up, we’re definitely totally okay, no need to withdraw funds!” said the haggard-looking president, holding up a $100 Monopoly bill with a crude crayon-drawing of his face shining at its center.

While econ majors are having trouble determining the exact exchange rate between Shapiro-Bucks and US dollars, the university is unfazed in its support for the program. “It’s somewhere between a Dining Dollar, and a Cat Cash, but at this point, we’re still trying to figure out what those mean,” said Janet Winthrop, Northwestern business administrator.

“Shapiro-Bucks are a strong currency, and will soon have real application in this global economy.  Everyone is gonna want a piece of Shapiro in no time!” said an unkempt Dean of Students, Todd Adams, who took a swig from his flask before whispering under his breath, “…who knew building multiple billion dollar facilities cost money?”