RA Not Here to be the Fun Police 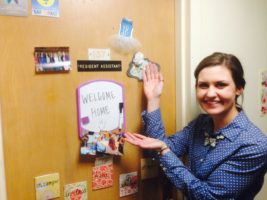 Abigail Nunez (WCAS ‘20) recently released a statement to her Chapin dorm students that she’s “not here to be the fun police” in an attempt to convince her freshmen she’s cool.

One of her students, Joshathon Caruso (McCormick ‘22), went on record to say “Abigail’s nice but I think she’s coming on a bit strong. She said she wouldn’t report us drinking if we took her out with us to AEPi but luckily we were able to escape by saying we were going to an improv show instead.”

Nunez has been ramping up her efforts to appeal to students in preparation for spring quarter, reportedly concocting a weekly drinking game/kahoot to help bring the students of the dorm together.

Her Co-RA Nathaniel Greenburg (Bienen ‘19) has been willing to turn a blind eye to this because “If they don’t talk to her than I’ll have to, so who cares if a kid or seven gets alcohol poisoning in the process.”

Nunez was last seen trying to bite down on the wrong end of a confiscated Juul.