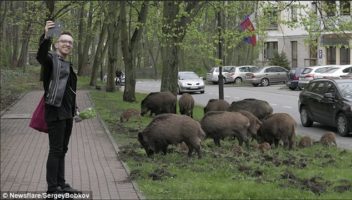 In what city officials are calling an “unfortunate mixup” and “a major oopsie,” dozens of wild boars were released into the local town Gilligan, IL for the celebration of Arbor Day.

However, some city residents rejoiced in the city’s mistake.

“An appreciation for Sus scrofa is long overdue,” said Eric Dickson, president of the Wild Boar Lovers of Gilligan club, “The media may call it ‘wreaking havoc’, but we call it curious exploration.”

Gilligan mayor Amy Rodriguez said that the city will make greater efforts to ensure that this “yikes-of-an-incident” will not happen again.

“We’ll get it right next year for sure!” Rodriguez said. “We’ll really promote cutting trees and growing hair. You know, for Barber’s Day.”