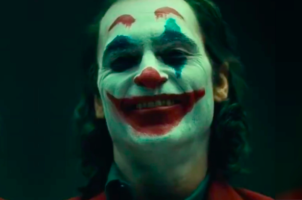 The recently released teaser for the upcoming Joker origin movie hints at revealing important information about the Joker such as his age, real name, and pubic hair color.

Director and co-writer Todd Phillips weighed in on this fascinating creative choice. “Nobody asked for this origin story, so we have to draw audiences in by revealing only the most vital parts of Joker’s backstory. How old is he? 44. What’s his real name? Arthur Fleck. What color is his pubic hair? Naturally brown, but he dyes it green during the film—whoops, pretend I didn’t say that last part!”

Phillips and executives at DC Films have decided to minimize some “less important, character-driven development” in favor of more critical scenes such as the anonymously leaked detail where we find out the Joker picks his nose with his ring finger. Rumors about the film also indicate that the Joker has two moles by his left nipple.

At press time, Phillips was reportedly considering extensive reshoots to draw attention to the fact that the Joker has more hair under his left armpit than his right, which he claims is “essential to the story I’m trying to tell”.