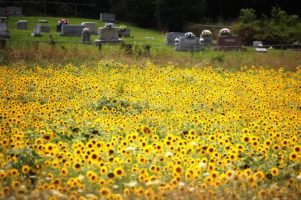 Tragedy struck Thursday when Margo Parsons (17), became the 50th photogenic white girl to explode after wandering into a sunflower field full of undetonated WWII landmines. The cheery explosives have become a daily hazard to today’s social media influencers.  Every week another senseless death occurs as a pretty white girl wearing a crop top climbs past a sign warning “Danger: Live Munitions and the Perfect Facebook Cover Ahead.”

The vibrant spring deathtrap, originally a testing ground for military explosives, was abandoned in 1945 hand-in-hand with the war effort. The landmines, however, remained active, and over time, an inviting yellow doom-bouquet sprung up around them.

Predictably, each of these terrible losses has occurred at golden hour, each second captured in horrific detail. One Boomerang shows the exact moment that Courtney #4 had her limbs blown off and magically reattached ad infinitum.

“We have tried to spread the word about this dangerous field, with ‘1 like = 1 less white girl in the sunflower field’ campaigns, but every effort has backfired, quite literally,” Daniels told reporters.

At press time, Daniels issued a warning to Insta thots everywhere to please avoid taking photos next to urban murals of angel wings, as old un-exploded A-bombs buried in the concrete have begun to give off dangerous radioactive levels. Also, that shit is “so basic.”