Ask Flippy: How Did A$AP Ferg Fill Out His Name on ScanTrons When There Is Not a Corresponding Dollar Sign Bubble? 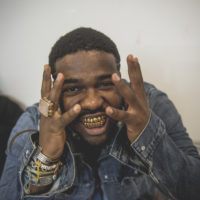 Dear Flippy,
I am obviously really excited to pretend to be excited that A$AP Ferg will be performing at Dillo. But there’s one thing eating away at me that it seems everyone is overlooking. How did A$AP Ferg fill out his name on ScanTrons when there isn’t a corresponding dollar sign bubble? He must have taken a standardized test at some point in his life, right? This isn’t just an apostrophe we are talking about here. What is the protocol, and why on earth is nobody talking about this?
Regards,
Exam Existentialist

Dear Exam Existentialist,
You sound like a crazy person! As if nobody’s talking about this…  EVERYONE I KNOW has been debating the issue ever since the rapper was supposed to play at 2015’s cancelled Dillo. I suggest joining one of the many heavily funded organizations available on campus dedicated purely to this important discussion. I, for one, think that he had to write his name as “A_AP Ferguson” when taking the ACT, while others go as far as to say they must have created an entirely different version of the ScanTron for him. Political Union hosted one of its most controversial debates on this topic. College Board, the vilest organization on the planet, refuses to reveal their solution to this profound, important issue. We can only hope that he’ll reveal the answer in a sick bar during his Dillo performance of “Work REMIX.” Until then, I hope you are able to sleep at night despite the burden of this pressing question weighing upon your shoulders.
$incerely,
Flippy