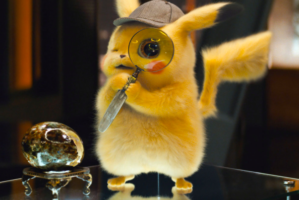 After a routine stop along Route 1 went south, it was discovered that Detective Pikachu’s bodycam had mysteriously stopped recording due to “static”. The chubby electric mouse in a deerstalker was investigating a reported disturbance, and after an altercation, a Ludicolo was found fried to a pulp. Detective Pikachu states that the Ludicolo just “jumped right at him” from the tall grass and it was “self-defense”. Police attempted to check Pikachu’s bodycam, but found the device had short-circuited, erasing all footage. The officer in question blames faulty wiring.

“I believe him… Detective Pikachu is a good cop, with a strong sense of the law. He’d never use Tackle without a reason,” said Deputy Chief of Police Charmander. “Who knows what could’ve happened? All we know is we have a sombrero-wearing pineapple-duck who looks like he stuck a fork in a light socket. Maybe we’ll never know the full story.”

The incident has led to a blow up on social media as well as many protests calling for further oversight of the police and sensitivity training. “You just know it was racially biased. You got a water type minding his own business when BAM, a Thunderbolt from a bigot comes flying out at you,” said Red, twelve-year-old Pokémon champion of the world and social rights activist for fictional characters.

Further outrage was fueled when it was discovered that Detective Pikachu had been given paid-time off at the nursery until the situation blew over. In a statement to the press, Chief of Police Charmander took a hard line: “Look, Ludicolo’s are known to hang with Lombres from the Hoenn region. There are good Lombres and bad Lombres. I’m sure there was some illegal rare candy trafficking or something going on. We should stick by our trusty law enforcement.”

Officer Jenny has come out against the chief of police, agreeing that changes must be made. “I’ve biked all across the Kanto region, and never once have I seen a Ludicolo doing anything suspicious. We need accountability. What’s stopping Police Lieutenant Bulbasaur from vine-whipping the first Caterpie that looks oddly at him?” Officer Jenny, notably the only woman and human in law enforcement in the country, continued: “I’d say it’s toxic masculinity, but frankly, I’m pretty sure none of these creatures have genitals.”

At press time, Detective Pikachu was back on the force, promising he would do better, before zapping a Pidgy out of the air to work on his “aim”.