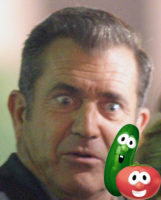 Good news for all your Veggietales fans, the beloved series is coming back to teach a new generation of young theologians about the bible stories as they were meant to be told: through anthropomorphic vegetables. Even better news if you’re an anti-semite, the reboot will be executive produced by Mel Gibson.

“Mel’s vision is very singular, and we’re incredibly happy to have him on board for this series” said a studio executive when asked about the matter. Flipside sources say that Mel’s “singular vision” is making Veggietales into a series hyper focused on the way “those damn Jews sold out the King of Kings”.

There has been some backlash, due to the critiques that this series is bigoted, ahistorical, and in no way in line with the creative vision of the original series. However, the studio has assured viewers that Mel has been personally looking at all these critiques before promptly putting them through a paper shredder, mumbling something about a globalist conspiracy.