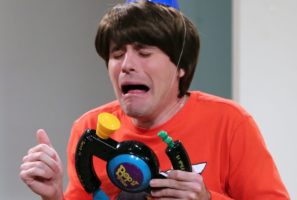 Solomon Mendoza, Weinberg ’23, was surprised last weekend to discover the dorm room party he was invited to was just six dudes huddled around a “Bop-It.” Mendoza was invited to the dorm by Michael Jones, also known as the ‘cooliest’ kid in PA group 67.

“I think I misunderstood when he told me it was ‘gonna be a bop,’” said Mendoza, “they were all really into it too. When I tried to leave, one guy put his hand on my chest and told me ‘don’t stop the bop.’ I honestly wish they were referring to Kidz Bop – it was that bad.”

Mendoza, however, has not been alone in this discovery. Just last week, Sophomore Harrison Smith reportedly overheard four students chanting in the lounge. “I went to investigate and one of the guys in the middle was painted like a ‘Bop-It’, and everyone else was lightly tapping him and chanting the associated action,” said Smith, “I’m not sure if it’s a cult or one of those weird clubs, but I didn’t want to interfere.”

After The Flipside attempted to contact one of the alleged members, a brick was thrown through the window of our lavish, third-story penthouse headquarters. Attached to the brick was a paper, on which a message was written in crayon: “Try to stop the bop. Get popped.” After helping the maids clean up the glass from our rose quartz floor, Flipside editors realized that this cult might have sinister motives. However, while very little is known about the mysterious group, Northwestern students are currently investigating possible ties to the “Hungry Hungry Hippos” group that was active last year on campus.

After hearing about the vandalism, Mendoza commented, “I’m not surprised. These guys really seemed to have nothing better to do than worship a Bop-It and commit petty crimes. I’m glad that I have since been invited to hang out with people who just drink juice boxes and watch Teletubbies in their dorm.”