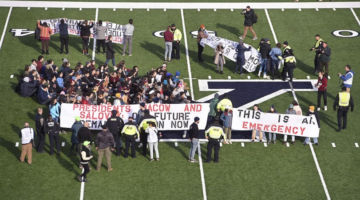 This Saturday, masses of student protestors stormed the field during the Minnesota versus Northwestern football game to protest the university’s stance of inaction against opposing football teams. The students pleaded with the administration to divest from predictable play calling, shoddy tackling, and horrific quarterback play that protestors say “could forever doom the Wildcat species.”

“It’s destroying us!” said an unnamed Weinberg student. “Ever since the team stopped caring about playing decent football, the climate in the locker room has been getting worse and worse! The Wildcat fanbase is already shrinking smaller and smaller, and if we don’t make major changes now, it may melt away entirely.”

Other students engaged in the civil disobedience shared a similar urgency to take action. “The way we’re treating opposing teams right now is unsustainable,” said protester Ian Johnson. “Northwestern’s overreliance on outside zones cannot continue into the second decade of the 21st century.”

Scientists have speculated that, unless major coaching and personnel changes are made within the next three years, Wildcat Football could be extinct by 2040. Despite the mounting evidence, however, not everyone seems to worry about the recent scientific studies.

“I don’t really believe in all of this science hoo-ha,” said offensive coordinator and Football change denier Mick McCall. “If handoffs up the gut have been working for the past 100 years, what’s to stop them working for the next 100?”