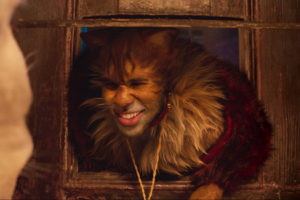 Singer-songwriter Jason Derulo stunned moviegoers earlier this month when he revealed that his bulge had been edited out of the theatrical cut of CATS. It appears as if the feline phallus of his character, the Rum Tum Tugger, has been reduced in size to make the film more family-friendly, although certainly not any safer for the viewer’s sanity.

Although initial reports stated that Mr. Derulo’s bulge had been deleted permanently, audience members seeing Greta Gerwig’s Little Women began reporting sightings of an unidentified furry object in seemingly every scene. It appears as though the members of the March family, lead characters of Louisa May Alcott’s beloved story, were not the only members in the film. The Jellicle genital has reared its head once again, this time in every shot of the renowned historical drama.

How did this boner occur? It appears as if the dick-screpancy occurred at the editing stage of both films. Melanie Oliver, the editor of CATS, says that Mr. Derulo’s cat-hood was removed from the film after feedback from Universal executives, test audiences, and a team of trained psychologists, but the data was kept on a hard drive instead of deleted on the express order of director Tom Hooper. “Tom was very clear: we are keeping Mr. Derulo’s digital penis saved just in case. I never asked in case of what,” she says.

Columbia Pictures reports the hard drive and all its sensitive contents missing from its archives. Mr. Hooper declined to comment on the scandal, or on allegations that he had been photographed near Sony studios with a leather briefcase. Anonymous sources from the production of Little Women suspect the worse: deliberate corporate espionage. Needless to say, Greta Gerwig is catatonic. Still, theories of the source of this uncut gem in Little Women abound: misogynistic hackers? Cat burglars? Or perhaps a rogue editor, wishing to see Tom Hooper’s vision erected in another form? Only time will tell, or perhaps this story will go to the dogs.

When asked for comment, Mr. Derulo simply said that he’s “glad his Rum Tum Tugger is being appreciated one way or another.”