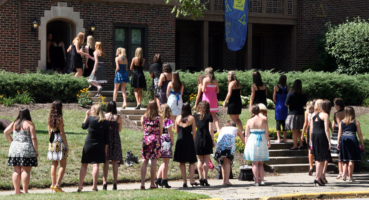 Since the infamous attempt of Barbara Roberts (’84) to strangle ex-roommate Paulina Pocket (’84) outside the Kappa Delta House over the last Altoid back in 1980, the boys in blue – er, purple – have designated one Girl Code officer during Rush week every year to break up catfights and crying sessions. However, this rush season, campus police report that this year’s rushees have gotten bolder, and girl code infractions have spiraled beyond the brave forces’ physical and emotional capabilities.

“I heard Jessica telling one of the girls at Theta about the time I laughed so hard at Norbucks that I sharted all over one of those little blue booths,” snarled Cecelia Raizee (’23) from her holding cell on the second floor of Searle. “I couldn’t believe she would do that to me after the unbreakable bond we shared. I mean, how many Elder pregames have we walked to from Ayers together? So I think it’s only fair that I tied her shoelaces together and made her miss the Kappa philanthropy party. How cute are those lace-up booties now, bitch?”

In the last three days alone, there have been 200 cases of girls refusing to lend each other hairties and check each others’ breath, 300 cases of Tic Tac theft, 400 snide comments about panty lines and three cases of girls peeing on their roommates’ mascara wands so that they would develop pinkeye before pref night. Campus police deployed an entire new squadron of Girl Code officers and even consulted the poor beaten-down Bobb RAs for help. However, the emerged from these tactics more terrified and confused than ever.

“We’ve tried everything,” said head of campus security Saul Blert. “CAPS is out of therapy dogs. CVS is out of Five-Hour Energy shots. Target is out of Kleenex. I’m pretty sure I saw someone sharpening her nails with a pocketknife on her way out of dinner last night. Who knew girls under the intense throes of blatant judgement from their older and cooler peers could be so damn scary?”

Though he declined to comment directly to Flipside reporters, Northwestern University’s chief of campus security was heard describing rush week to the NNN weather desk as “somewhere right above Pompeii on the list of all-time natural disasters.”