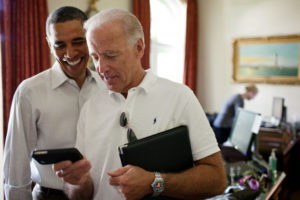 Last week’s Iowa caucus results were delayed due to significant malfunctions with a new vote tabulation app. The disastrous technological mishap threw the Democratic party into utter chaos, and experts are still working to diagnose what appears to be a complicated internal coding issue. Former Vice President Joe Biden was happy to weigh-in on the situation, suggesting his “techy” niece take a crack at fixing the app.

“Soph’s great at that sort of thing,” Biden commented, standing outside a New Hampshire campaign bus. “Just last week she showed me YouTube. And get this, all of those videos are free! I’ve already sent Barack like ten clips from the Masked Singer. So trust me, when it comes to online apparatuses, this kiddo’s a pro.”

When asked if the DNC should continue using the app to analyze the results of future elections, Biden answered with a resounding “no,” adding that all this “fancy-shmancy virtual crap” is a bunch of “malarkey.”

“Why, back in nineteen-tickety-six if something broke, you fixed it. Simple as that. I don’t see what the hold-up is here,” said Biden. The former vice president then went on to tell a long-winded personal anecdote about his father’s days as a used car salesman.

He guaranteed that if the DNC chairman would give his niece, Sophia, some time to “fiddle around in there” and “knock a few buttons” the app would be running smoothly in no time. It is unclear exactly what interior Biden is suggesting get “fiddled,” or what “knocking” buttons looks like. However, he did mention Sophia’s credentials as always being able to remind him where the input button is on the remote.

At press time, Biden was overheard talking to voters about this new Bernie “meh-me” that “had [him] in stitches.”