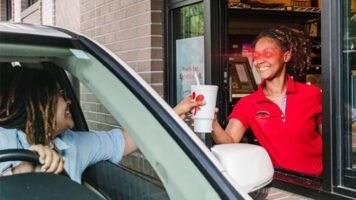 The fast-food chain Chick-fil-A announced last Monday that they would no longer be serving customers with the level of hospitality that they typically expect from the restaurant. Employees will be turning to a shocking 12-point plan designed to boost sales and ratings by psychologically increasing the customer’s desire for their food.

They are utilizing what they have dubbed “the bad-boy effect”: no matter how badly they treat their customers, they will always come back. Many of the steps focus on setting up a reward and then denying it from the customer, making them crave that reward even more when it finally arrives.

“You want your Chick-fil-A sauce? Go and get it!” shouted Chick-fil-A CEO Dan Cathy as he demonstrated “Step 9” of the plan at a Chick-fil-A in Boulder, CO. “You have to, have to, HAVE to keep the customers on their toes. One second you’re handing them their drink with a smile, the next, you’ve slipped horseradish into their sandwich in place of the chicken.”

The company’s plan closely follows the psychology of rewards and the habit loop. “If you ask me, the people who eat our food are borderline animalistic. They’ll do anything for two little packets of our sauce,” stated Chick-fil-A’s chief psychologist Rosalind Barry. “We have the monopoly, they’re willing to dance for the chicken sandwiches, so we’ll make them dance.”

Avid Chick-fil-A consumers nationwide spewed hatred towards the company on numerous social media platforms. However, Chick-fil-A saw a massive spike in sales in the days following the implementation, proving Barry right, at least for now. The employees have responded positively to the changes, even going above and beyond their required training when it came to stripping customers of their morale.

Chick-fil-A is looking into merging with an anger management group so the employees can learn negative behavior from the patients, that they will then use to harass their customers. “It’s a free market, so no, I don’t feel bad,” Cathy concluded.

Instead of ending the interview with a handshake and a courteous goodbye, Cathy spit his gum out on the floor and attempted to moon the camera before he was forcibly restrained by authorities.