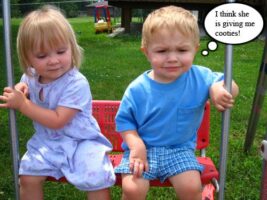 With the recent cooties pandemic ravaging Evanston Middle School, the brightest minds in the 3rd grade have unveiled the fruits of their research: a preliminary vaccine that will hopefully bring an end to the outbreak.

Class president Suzie Waters made time in her office by the hopscotch court to discuss the plague and her attempts to curb its spread. “The first wave during recess claimed upwards of 20% of the class,” said Waters. “Measures to prevent a second wave during lunch period have been drastic.”

Due to the seemingly unstoppable spread of the cooties, Jason’s ninth birthday sleepover was postponed until a vaccine could be found. Rumors have also been spreading that Capri-Sun distribution networks within the school may be affected by the outbreak.

In the darkness of uncertainty surrounding the cooties pandemic, there may be a ray of hope. Due to foreign aid from the 5th graders, playground researchers have managed to develop an experimental vaccine using top notch Crayola Magic Marker technology. This vaccine will be administered as a skin salve and has shown strong numbers thus far, reducing the risk of cooties transmission by up to 30%.

President Waters outlined her proposed legislation to speed up the development and distribution of the vaccine. Operation Circle Circle Dot Dot is slated to be presented to the Parent-Teacher Association for a vote on Thursday of next week, where it is expected to be signed into law.

President Waters’ announcement about Operation Circle Circle Dot Dot comes days after she tested positive for cooties after a diplomatic game of Four Square with emissaries from the 4th and 2nd grade, where they coined the promotional phrase “Circle Circle Dot Dot, Protect your Juice Box with a Cooties Shot!”