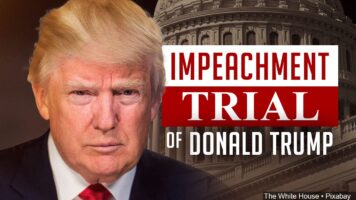 After the release of President Trump’s impeachment sequel on Wednesday, critics are saying it’s“a little stale” and “been done before.” The sequel’s flop has also been attributed to the crowded market, as viewers were still engrossed in other blockbuster hits from 2020 such as “The Mask: Fucking Wear One”, “Back to the Computer”, and “Murder Hornets From Outer Space”.

“The original impeachment set a standard that the sequel struggled to meet,” says longtime film critic Simon Powell. “The new plot was bland, and the ending was a lazy and rushed attempt to conclude the presidency. Not to mention they cut out Mitt Romney, who was one of the best characters.”

Powell did acknowledge the many plot twists of the sequel, including (spoiler alert) the ten Republicans who voted to impeach Trump and the Tarantino-esque violence at the Capitol. However, these twists “ultimately failed to live up to the precedent set by the groundbreaking original” and “left a lot of loose ends”. Rumors state this will be the last impeachment, despite the cliffhanger conclusion.

The general consensus seems to be that Donald Trump: The Return of Impeachment 2: Electric Boogaloo is far from a must-see. Although it finally ended the long and painful franchise, it was unsatisfying and lacked any standout performances. The final verdict? 3/10.