Op-Ed: Hey, Those Cars in the Movie Cars Are Fucked Up, Right? Like, Where Are Their Bones? 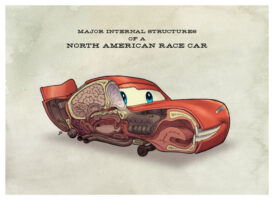 Ah, Pixar. With a knack for making movies beloved by adults and children alike, every Pixar movie except for “A Bug’s Life” has a little sparkle of magic. In this very special edition of Noelle’s Film Corner, we’ll be discussing one of their most profitable franchises, “Cars.” Chiefly, what the fuck is going on with these cars, guys?

The godless abominations have tongues, so they clearly consume some sort of food. They also have handles, which seems to show that humans used to drive the cars, but there are no humans to be found. Did the cars eat the humans after gaining sentience? Do they have bones? Digestive tracts? Do cars shit?

Apologies, dear reader, but I’m still wrapping my head around this franchise. How are the cars born? Are they assembled in a factory, or do the cars have sex? Does Lightning McQueen fuck? Does Mater fuck? Dear god, does Mater fuck??

Join us next week in Noelle’s Film Corner, where we discuss whether or not the toys in “Toy Story” have souls. See you next time!

Entertainment, Featured, Latest News, Opinion, Year 13 Cars, op-ed, what is wrong with the cars from cars (2006)