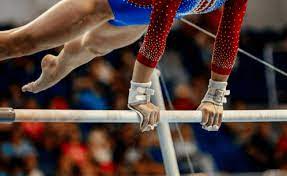 EVANSTON — The despicable Dr. Moodering, mildly feared by all, and infamous for baking all of the city’s wheat into a single giant pancake for her own pleasure, has come forward with a new evil plan to guard this pancake that has shaken the very foundations of villainy.

Rather than constructing a long hallway filled with laser tripwires pointed every which way, such that only the most skilled gymnasts can somersault their way through, Dr. Moodering has put all the lasers in one column, all pointing in a single direction. This makes it impossible for even the most limber of heroes to circumvent the lasers and is an offensive jab at the gymnastics community.

Our local superhero and vigilante, Meatier Man (whose name, as previously reported, came to be after an unfortunate typo at the uniform store), backflipped into Doctor Moodering’s lair in an attempt to steal the pancake (aiming to return it to the people, to whom it belongs), and found himself completely blocked by the laser tripwires. “It’s just so unfair,” he said, “and not becoming of a career supervillain who interned under Dr. Doofenshmirtz.”

Protests from members and allies of the Evanston Gymnastics Guild (EGG) have erupted all over the doorstep of Dr. Moodering’s quaint apartment building on Foster Street. Tens of protesters are contorting themselves into strange shapes in a show of defiance against this act of anti-gymnast hatred. However, it appears that Dr. Moodering, who is currently concocting the world’s largest pitcher of maple syrup, is unperturbed.