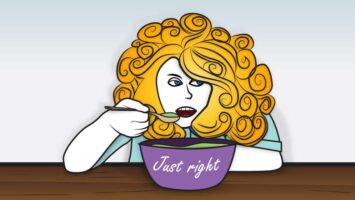 The eponymous star of the classic fairy tale “Goldilocks and the Three Bears” shocked the political arena this week when she dropped a New York Times opinion piece detailing her extremist conservative views.

In the 7,000-word article, Goldilocks claimed that the far right is the only political ideology capable of saving the American dream. “The left wing doesn’t care about your opinion,” she railed. “They would simply shove you whatever cold porridge they have, and you would be expected to not only eat it, but share it with a bunch of lazy freeloaders and pay taxes on it!”

Goldilocks went on to comment that there is only one bed for the “liberal loonies”, that being “a bed of lies”. Conservative leaders, including Tomi Lohren, several House Republicans, and the Itsy Bitsy Spider, have applauded her statements.

While many fans are shocked, former costars seem unsurprised. Papa Bear said it matched the behavior he dealt with years ago: “She wouldn’t remove her bearskin rug, even after I told her that it was offensive to our culture.”

Mama Bear has become a social recluse and could not be reached, but Baby Bear dropped a viral diss track on his YouTube and TikTok accounts titled “ ’Locks Gonna Get Glocked”.

Critics were quick to question Goldilocks’ “tough on crime” stance and staunch defense of private property considering her past actions with the Bear family, in which she was charged with breaking and entering, tampering with personal property, and verbal harassment. When asked about the apparent hypocrisy, Goldilocks shouted it was “fake news” and proceeded to chase off reporters with golf clubs from Mar-a-Lago.