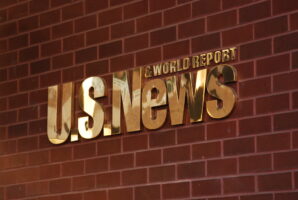 In his last year as the President of the Northwestern University, Morton Schapiro has announced that he will exit with a literal bang.

After a series of complicated negotiations that incidentally involves a Flipside negotiator losing his innocence to U.S. President Joe Biden, Morty has finally allowed our journalists to check out the process of his last ditch attempt to bump Northwestern up to #8 on the U.S. News & World Report’s Best Colleges rankings.

“You know, it’s not easy being the president of the ninth-best university in the nation,” Morty told us as he leads us to a secret tunnel in Tech, “You not only have to avoid having your mansion getting egged by students, but you also have to keep your superiors pleased.”

We entered the secret sanctum, where the U.S. News editorial leader, Rooster Reidhard, was chasing two students who got lost in Tech and somehow ended up here. Morty locked the students in the supply closet, and told them to “come out when we’re done, boys.”

Morty told us to wait outside while he engages in the “ultra secret negotiations.” We have not had the chance to witness Morty’s master skills of negotiation, but based off of the shouts of “harder” as well as the moaning, Flipside investigators have concluded that Morty, our great leader, is working really hard to make Northwestern better.

However, other students are less than happy. We spoke to the President of the Northwestern Virginity Club, who wishes to keep their name protected.

“This is an outrage!” says the NUVC President, “Our club mascot was Morty because we looked up to him! This cannot stand!” A spokesperson for the Virginity Club has announced that the organization will immediately switch its mascot to Melania Trump in a sexy nun costume.