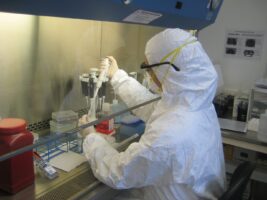 In this strange and unprecedented time, a year-long study from the Kellogg School of Management has confirmed our worst fears; that the COVID-19 virus most certainly made some form of an impact on the human race.

Among other shocking discoveries, the study posits that the masks that everyone wears are more than just a fashion trend, and that they reportedly mitigate the spread of the virus. In addition, scientists have determined that the isolation that occurred in March of 2020 was not because Willie the Wildcat contracted rabies, like many initially thought, but was instead to “flatten the curve” of COVID-19. “Still, I’m fairly certain that Willie had rabies,” says SESP junior Gwen Fefum. “No sane animal runs into the lakefill at 11 in the morning screaming about how they see their future self.”

Though the study makes great strides, many questions are left unanswered. “We cannot definitively say whether the impact of COVID was positive or negative, only that it existed” said lead researcher Daniel Hamphery. “Honestly if you guys could spread it around some more that would make it much easier for us to see what’s up in the future.”

The study was so widespread and highly regarded that the esteemed Ryan family decided to pledge $5 million to Kellogg in order to fund future research.

“It’s been really amazing seeing what these students can do,” said the Ryan family in a statement to Flipside. “Even though COVID hasn’t affected us all the way up in our ivory tower, we still need to encourage research that benefits the little peasants citizens of our planet.”

These great minds have even more to offer. In the coming months, a highly anticipated study headed by Kellogg senior and Sigma Phi Epsilon Brother Chad Drunkinton, plans to inquire about a potential association between alcohol intake and liver damage.