From the Future: And One Best Buy Account to Rule Them All 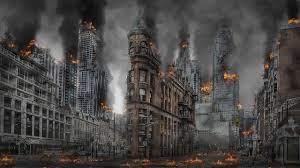 The cold winter air laden with radioactdust blows across my face as I cross the New York Dust Wake, remains of skyscrapers strewn about the wasteland. I take a huff of my FauciAir™ — it’s the only clean stuff we’ve got left — and drink my piss to prevent dehydration. My son moans in the back of our tandemJeep™ about not having any more expired canned peaches, only rotten SockBeef™ from Walmazon™.

I turn to him, hope in my eyes and piss dribbling from my mouth. “Son, one day, I promise you it will all get better.” And he looks at me with doubt in his eyes and a mouthful of piss, a look I’ve become increasingly familiar with ever since the Before Times, silently screaming his disbelief. And as much as I want to scream back in fear and anger, I know that what I say is true. “You might not believe me now, but we’ve been through worse, us DustScavengers. One day you’ll inherit the BestBuy account passed down from my father before me, and his father before him, all the way back to the great Steve Zucherberg Bezos Trump — and those discounts and deals will carry you to old age, despite our living in squalor in the Dust Wake.”

His eyes twinkle, and the piss on his face glimmers in the moonlight, and I know this revelation has struck a chord with him — the clan which holds the BestBuy account has become naught bust a whisper carried by the DogBatCats across the Wake. The one thing that pains me most, which I don’t have the heart to reveal to him, is that we lack the answer to the security question which binds the account: