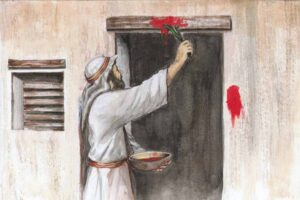 In a recent Pesach-propelled investigation launched by EPD, local Evanstonian Natcheu Ishe has claimed that the dripping smear of lamb’s blood on his door was “not a religious thing, just leftovers from dinner.”

Ishe, a longtime Evanstonian, is now the center of a citywide investigation. Though the important Jewish holy week is underway, Ishe maintains that his gruesome display had nothing to do with Passover. “I mean — hell, I was just practicing my butchery skills,” Ishe said. “And you’ve always got leftovers after taking the cleaver to some animal. I thought to myself, ‘Gosh, may as well have some fun with the leftovers. Why not put the blood on the door?’ What a mistake that was….”

Ishe’s neighbors, however, remain unconvinced that his artistic inspiration had nothing to do with Passover. One resident, who wishes to stay anonymous, told the Flipside a vastly different story than Ishe’s: “Strange things are always happening on the other end of the cul-de-sac. Why, just the other week, a bunch of amphibians came bounding right out of Natcheu’s front door! There were frogs here, frogs there… frogs were jumping everywhere!” The resident continued telling their story, noting in particular that they had “[woken] in [their] bed” with “frogs on [their] head.”

While EPD has concluded that the lamb’s blood mark was “no threat to person or property” in the neighborhood, forensics experts will still “thoroughly investigate the area for signs of lice, flies, locusts, and corpses of firstborn children.”

The Flipside will continue to report on this story throughout the week should more information come to light. In the meantime, EPD attention is being dedicated towards rumored sightings of an invisible, burgling alcoholic. Chag Pesach Sameach!