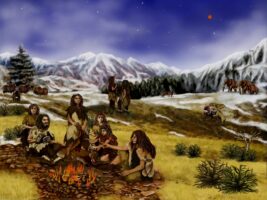 Vinyl records, bell bottom jeans, the use of stone tools: all items used by the modern generation who long for a more simplistic past. It is commonplace today to see people use vintage tools or wear outdated clothing because they feel disconnected from the current generation. After all, gen Z’s cell phones, social media, and developed frontal lobe can seem overwhelming to the average person. No one understands the issue of being a chronological pariah more than Grog Stonespear, who believes that his pronounced browline and love of mammoth hunting sets him apart from the modern generation.

Stonespear believes that the modern generation has become dependent on their new technology like agriculture, or clean water.

Grog Stonespear is not the first to reminisce about the halcyon early hominid days. Tiktok users may be familiar with Liver King, an influencer who promotes a primal lifestyle by eating raw meat and “training like his early ancestors.” When asked to comment on his fellow primal influencer, Stonespear referred to him as a “bandwagon caveman” and a “drip-biting poser.”

“He copy whole fucking flow. Bar for bar. He bandwagon. No true fan.” commented Stonespear, apparently drawing on the caveman’s penchant for gatekeeping.

If you wish to ask Grog Stonespear any further questions, you can find him stalking the campus rabbits or watching a local bonfire with a bright-eyed wonder.